It started innocently enough. Honest, it did. When I first started working with Willy he was very “looky.” A little spooky, sure, but mostly he would look hard and watch things that freaked him out, until he realized they weren’t going to eat him. He is still like this, though not so bad after months riding out in the fields and trails.

During these early days, I noticed that if he became “looky” while I was leading him, he would often gently touch his muzzle to my shoulder or arm and then look back in the scary direction. I would rub his neck and talk, he would relax, and we’d continue on. The touch really was a touch, not a push, and it never involved biting or liping at all. I saw it as his way of seeking reassurance.

At some point I realized he had started to touch me with his muzzle while I was leading him. Again, it was gentle, barely a nudge really. It felt like affection.

I know, I know! I should have known better. Truth is, I didn’t give it much thought for awhile. He walked relaxed on the lead, a step behind me. I wanted to start getting him closer to my shoulder while leading but I was fine with him trailing a little rather than rushing ahead. Call me a fool but I have to admit those gentle nuzzles warmed my heart.

Maybe I just needed to believe I could share affection like that with a horse after my experience with Brumby?  I have a hard time understanding the bond othrers refer to. Brumby and I developed a good working relationship and I guess there was a bond of sorts but it wasn’t how other people describe it…I’m pretty sure a horse’s willingness to literally or figuratively throw you under a bus is an automatic failure in the horse-human bond department. 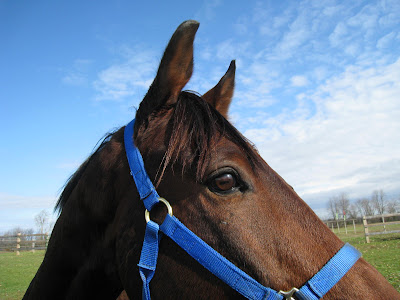 In any case, one day Willy gave me a slightly bigger nudge as we were walking and it suddenly dawned on me…he’s moving me!  He’s gentle because I am a good little subordinate and move along right politely! This was around the time Kate was posting about dealing with Drifter’s pushy behaviour and I was reading a Mark Rashid book so if I wasn’t going to clue in then, I never was! I fully credit those two with my epiphany (and burst bubble!).

Since that realization, I’ve tried really hard to set my boundaries and be consistent. My main problem is that I don’t think I believe in my technique enough to stay consistent. I start second-guessing myself and when I do that, I end up letting a behavioural “question” go unanswered.

Some of my issues/questions:
-          I don’t know how to correct him when he nudges me. I’ve been just trying prevent it from happening by being more aware of where he is and stopping his head from coming closer by adding tension to the lead. When it does happen, I’ve tried:
o   “gently moving him back or away from you” as Mark recommends. Yeeeah, um, “gentle” and “backing” are not words that go together just yet if I’m trying to do it without the arena wall next to us and a dressage whip to tap his hip over. Even in the arena I’m still trying hard to get straight(ish) backing. If backing on a 5’ circle was the goal, we’d be, like, GP level ;-)  Anyway, even when this correction goes well, I’m convinced the cause-effect is lost on him.
o   I have also tried the getting big in his face approach. He sometimes puts on quite a show of displeasure and definitely has it in him to fight back a bit (it’s mostly show and he backs down, but I’m still careful). Problem – I feel like an idiot doing this and don’t think I have the conviction to throw a fit if there are people around. Hey, I’m being honest here. I’m also not convinced it works and/or is necessary.
-          I’ve always said that Willy handles better with a soft approach, rather than a loud punitive one. This is why I started with the “back him out of my space” approach and why I have a hard time with the “get in their face” approach. It’s like I’m undoing some of the good understanding we have built together.
-          Is it always bad if a horse touches you with his head? Is he definitely, without question, thinking that by nudging me he is moving me out of his space (and is therefore boss)? Can a touch just be a touch? Can they comfort seek?
-          For awhile I made sure to work on backing in-hand a little, every time I was out. It seemed to help his manners overall (and it’s good for his stifles!). I haven’t done it lately but I should probably step that up again.

What do you guys think? Any advice on keeping consistent in handling or correcting pushiness? He’s not really bad but I feel a lot of responsibility for teaching him the best ways to get along with humans.
Hastily scribbled by RuckusButt at 10:06 PM

I'd be inclined to actually "work" on leading and ground space in dedicated work sessions - a chunk of time where that's what you're doing together.

And first you have to decide what the boundaries are, and then stick to them. Otherwise it isn't fair to him. And it doesn't matter how you move him out of your space - do whatever works for him and you - some horses respond best to noise, some best to hand gestures, some to backing in hand.

And if he shows any sign of fussing or aggro, don't under any circumstances stop - if you do he's just trained you. Any signs of aggression - head shaking, striking, etc., you get right in there and move him - in that case I'm not that gentle.

I don't mind horses touching me when I'm nearby, say when grooming, but not when I'm leading - that's work and we have rules.

Good luck - you might want to try some leading exercises like the ones on my sidebar once you've got the personal space thing nailed.

Hmmm - interesting and good that you caught on to what he was doing... The touching thing is tricky - but I kind of like Kate's statement - "leading - that's work and we have rules". That is in line with what the new trainer dude we have at our barn has been telling me.

I just finished Whole Heart, Whole Horse (not sure if that is the book you were reading or not) but it really got me thinking about when a horse touches you and what is going on.

Lots of stuff to think about - I feel like there is lots more to talk about on this subject, but it is hard put into words in a little comment box!