Have you ever felt that, despite your best efforts to help your animals, you accidentally end up doing more harm than good? I had that experience this week.

Willy had a wart-like growth on his side that showed up fairly quickly a couple months ago and then fell off on it's own. Well, it regrew, so I showed it to his owner (the Barn Owner) to get her advice. She gave me some sarcoid cream (xxtera) to apply. The directions were once a day for 4 days and then once a week or so.

I ended up doing two consecutive days of treatment, one day without, followed by one day with. On the fifth day, which would have been the fourth application, I noticed the fur around the warty area was a bit crusty. I figured the cream had spread out some as I had been careful to apply it only to the wart itself.

I thought it best to clean the excess from the surrounding fur before giving the next treatment. So, I applied a warmwater facecloth to the area and began gently cleaning the fur. I alternated holding the cloth against him to soften and dabbing at the area.  After 2 or 3 times, most of the fur was clean but for one small section.

I held the cloth against my horse one more time, rubbing his neck and admiring his shiny coat while I did so. When I removed the cloth, I noticed a small area of rawness opened up that hadn't been there before. I ever so gently dabbed just below it and was horrified that the top layer of skin seemed to be peeling off him.

It was as if it just melted right off. I was horrified at what I was seeing (and probably feeling more drama than I needed, but I was alone so no one else had to deal with it!).

I ended up with about 1.5-2cmx1cm half-moon area that was raw and slightly pussy under the wart. I cleaned this up and applied some Hibitane to the wound.

I drove home with a heavy heart and had nightmares all night. Can you say first time horse mom? I know I'm not really, but even his owners consider him my horse at this point.  I spent a bit of time in the moring doing research on sarcoids and treatments and feel marginally better but I am also armed with other, less horrid, ideas.

This afternoon I went out to check on him.


This is what it looked like.
The sarcoid is the black circular area inside the raw area. 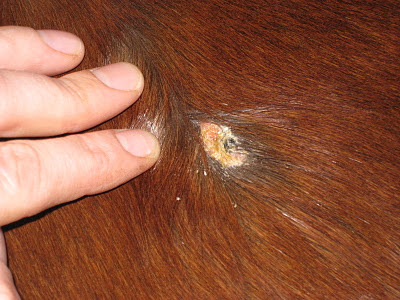 I saw the BO and told her about how I was devastated that I was melting the flesh off her horse. She said, "you mean your horse?", and then..."It's ok, that can happen with this stuff, relax, he'll he fine. I will come see him after I check on my spagetti sauce.".  I was lunging him in the arena by the time she came out. We admired his back muscles working and then took a look at the area in question. She assured me that he wasn't about to lose a limb but to wait a bit before treating again.

In her opinion, nothing should be applied to the raw area because you want it to dry out.  Personally, I'm quite sure recent research has shown that a petroleum-based antiseptic cream heals faster as it prevents cracking in the healing tissue. Opinions on this?

I cleaned the area of the dried pussy bits and applied a thin layer of petroleum based antibiotic cream on the raw area only. I need to do what I think is best and they have told me to do so whenever I see fit, since they know I don't make rash decisions. Still, I don't have a lot of experience of this level of care with a horse because I always had to follow other peoples orders, whether I agreed or not.  Regardless, going forward I think I will apply some bag balm or something around the wart before applying the sarcoid cream, if I do have to treat again. Hopefully that will protect the surrounding tissue more.

You aren't a bad horse mom! lol A bad horse mom would just leave the sarcoid/wound alone and hope that it went away on its own!

I know very little about horse wound treatment... I'm sure you'll figure out the right thing to do. I've heard that xterra is hard on the skin, so protecting the surrounding area ahead of time sounds like a good idea. Alot of horse creams seem to melt and run a bit, so maybe that is what happened or he rubbed it a bit?

I know for human wounds, I've had better luck using antibiotic cream to keep the area moist - less scarring that way. The old school way was to let everything dry out.

Xtera is supposed to do this - it only affects the sarcoid tissue, not the normal tissue - you want it to look raw and bloody. It doesn't affect normal tissue. It doesn't hurt the horse as sarcoid tissue doesn't have normal nerve endings. Just finish the treatment and soon it will dry up and fall off. Our Dawn had a large sarcoid and the treatment worked great - it never has come back. Don't pick at it or put anything on it or cover it as then the treatment won't work.

Interesting. My research on zinc chloride (ingredient in xxterra) indicates that it can tend to absorb into malignant tissue better but that it most certainly will affect normal tissue. In fact, one journal article I read used zinc chloride as an irritant to test the effectiveness of barrier creams at preventing irritation.

By what mechanism would it be so selective in the cells it affects?

In any case, the skin that peeled off was normal tissue. The growth is very small (less than a pencil eraser before treatment) and it no longer protrudes but is flush with the skin, so it has improved.

The raw area looks much better today so I think the bit of polysporin was a good thing. I'm not applying it over the warty area, as I mentioned in the post.