Into the Breach...of Crazy or Cure?

Well, I've done it. I started a 10 day course of equiwinner patches. I know I said I wouldn't be chasing every last diagnostic but being faced with euthanising Willy, I find myself looking at anything and everything for an explanation. For a cure. Maybe we all need to experience that one horse who you do everything for to learn for yourself what "reasonable" is. I can feel my heart and brain having heated debates over options. They like to do this when I should be sleeping. I'm afraid my heart is good at making my brain think various ideas were brains all along. Pretty good marriage ;-)

The relationship I have with this horse is rare - I know enough good people struggling to find or develop a bond with their horse to know this is true. I've previously had nothing but those experiences myself. Sure, I've had ok working relationships with horses but nothing that remotely compares to this. I'm not talking some ethereal thing where the horse does cartwheels when he sees me or bows for me to mount. Just the sweetness of familiarity and commraderie and working hard for each other.

Let me back up a little. I spent many hours doing some research in veterinary journals on headshaking. What I found was not even the least bit encouraging. I hadn't looked this deeply before because there were still clear options from my vet and when those petered into drug options, I sought a chiropractor first. That had some success (over 4 weeks!) and then a return to headshaking just as sudden and inexplicable as the first time. An "emergency" chiro visit did not identify anything that would explain this. She said if he didn't get better she would come out and watch him go under saddle.

I had no aversion to the chiro watching me ride Will beyond the usual weird feeling when you know someone is trying to see if you're doing anything wrong. But everyone at my barn has been doing that for months anyway, so I am somewhat used to it. The coach I'm riding with now (when we have been able to) has seen him go when he doesn't headshake and when he does and I know she would correct anything I was doing to cause or encourage it. And she absolutely has the skill to know. She's actually had me try a number of things and aside from being as flabbergasted as I am, she is complimentary in how I ride through it.

So the only thing with the chiro is I don't particularly think she will be able to identify anything by watching us ride. I'm 100% willing to try when she's back in town next week, I just don't see it being the answer. He was fine for months with me as the only rider, then suddenly developed headshaking, then had 4 good weeks, then suddenly came back (during a hack, no less). So if I'm the only constant, I think that rules me out, logically.

So this lead me to focus more on research in veterinary journals. Since I'm no longer at the University of Guelph, I can't access full text vet articles as I used to (yep, I developed quite the hobby of this during grad school in human psychology, lol). University of Ottawa uses the PubMed database but must be able to opt out of most veterinary journals since they don't have a vet program. Some I can get but the rest I have to rely on abstracts and sometimes doing some sneaky googling helps find articles.

Essentially, the research shows that if you don't find the cause for headshaking with physical exams, blood work, endoscope, or xrays than you will never find the cause and it will be determined to be idiopathic headshaking. So my vet has recommened everything exactly as per current best practice for Willy's presenting symptoms.

The next steps in the literature would be drug therapies. These are not cures but have some success in managing symptoms. Initial success doesn't tend to last and drugs tend to lose effectiveness over time (varies).  At 6 years old, even if the drugs stayed effective that would be +/- 20 years on drugs for this condition. They aren't without their side-effects. Drugs do not seem to me to be a reasonable or ethical option. There is also a surgical option - compressing or severing the trigeminal nerve in the face. I'm not considering this as a reasonable or ethical option.

This lead me to be willing to try a reasonably priced option that at worst would do nothing at all (described in this post). It helped that I found someone in this area who used them for the same issue with success. There are real people behind the testimonials!

In his first night with the patch, Willy drank his whole bucket of water (it was full at 9:30pm and checked at about 5:30am) when he usually does not drink much during the night. He hasn't ever drank more than half a bucket during the year I've been with him, and even that much is rare and pretty much only when he's had a good ride and then in his stall for the night, without any turnout in between. If he's turned out after the ride he drinks right away but won't have much overnight. Last night, the first night of the patch, he drank his full bucket then went straight to the waterer when he was turned out. It seems like something might be happening. Needless to say, I have him on night check for water.

I feel like a bit of a nut-job for trying this but it is worth a try, given the alternatives. 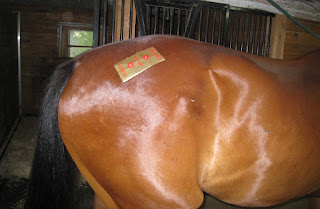 Hastily scribbled by RuckusButt at 11:16 PM

Well, I think it is worth a try. How is he doing today? Any progress?