I have tried another four horses, including my coach's horse. I have exchanged correspondence with countless others and created a spreadsheet to keep track of it all!

First up, a 7 year old QH gelding. He was ok, but just ok, and was priced accordingly. Not perfectly sound on his right hind and owner disclosed that his right hip occasionally "goes out" and benefits from chiro work. Not the end of the world but also not what I'm looking for.

Another was an 11 year old gelding by Rio Grande. He has a dressage background, shown up to second level and schooling third level movements. He was made sour with all the dressage training and is currently being retrained for hunters. He was incredibly hard to get going but did improve a bit. He has obviously been packaged so much, it was like riding a pogo stick. Nice enough jump. If I could, I would just buy him and do nothing back hack around all fall and winter, let him learn to have some fun with a rider! Also needs hock injections. I also learned, through a friend at another barn, that this horse has had many issues and his leasor hasn't been able to ride until recently.

I also tried a 3 year old gelding by Apiro and out of a Popeye K mare. This young guy is the closest I've found to what I'm looking for. He is green but willing and has very fancy movement. I could definitely see him being a life-horse for me. My coach doesn't think he's worth the asking price since he's so green and has no experience but the owner is not willing to budge.

Now, as for my coach's horse...what can I say? She was pretty much perfect in every way. She felt like an extension of me instantly and although it would obviously take more than one quick ride to understand her perfectly, we did very well together. I have never been on a horse that moved that well even though she's been out of work for awhile (V just had a baby) and is a little out of shape at the moment. It still makes me break out in a stupid grin just thinking about the feeling. Her attitude is just as wonderful. She is not a princess, she is a Queen. 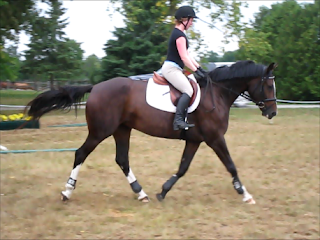 In person, she is simply radiant.

I never should have got on her!

Hastily scribbled by RuckusButt at 9:50 PM

It sucks when you find the right horse and the $$ is prohibitive. :(

We ALL want the horse we can't afford!! I did buy a horse a couldn't afford about a year after I graduated from college. I didn't need another horse (I already had a REALLY nice jumper at the time) and I really didn't have the money. I cherish every memory I have from my time with her. Would I over extend myself on a horse again? Well, probably not but I don't regret doing it at the time, she was a great horse and I had so much fun with her.

Oh, it's love alright! Even my husband agrees and is smitten with her and recognizes how awesome she is.

Melissa, you aren't making my rational arguments any easier to keep up! But even if I could scrape together enough for her purchase price (which is astronomical, to me), I couldn't afford her monthly board. The places where I could afford indoor board don't allow you to bring your own coach and those that do are either too expensive or too far. I would never keep a horse like this on outdoor board (which is my plan for my new horse, except for maybe a couple months in winter, if necessary).