Okay, so it's been over a week and I haven't written about my first show yet. I also was informed that I was successful in a competition for a promotion last week, so it's been really quite a ride and quite busy!

How was my first show?? 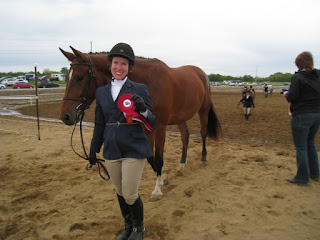 I entered the Green Hunter division (2'3", 3 over-fences classes, 1 under-saddle). We won our first class. Then got second in the second and third in the third. I'm not sure if that progression was because I was getting more tired or Armani was getting more fired. Whatever the cause, we had a few not-so-perfect distances coming in to the lines and did a couple of chips and a couple long spots (as I tried to avoid the chip!). The long spots were quite a bit better - just a hair longer than a good hunter distance. But we've been allowing the add for awhile, so that certainly showed up. In my opinion, once I clean up my turns and get better corners, the distance will be right there for me. I'm working a little too hard right now to keep him out long enough, which is affecting our corners.

We didn't miss striding in any of the lines and got every lead-change smooth as can be. I might be biased but I'd say that's fantastic work for my four-year old baby boy! I was a VERY proud momma!

We ended the day with our under saddle class. When the class was over, the judge called out, asking who was with 51 (that's me), so I heard later. Sasha was near the judge and said "Uh, well, I'm her husband" and the judge proceeded to tell him that she had me pinned 1st for the class and that I was her Champion but that I broke to the trot during a walk segment in the u/s and normally that would have dropped me way worse than it did that day. I have to admit, I wasn't taking the u/s part as seriously as I should have - it felt like I was just riding around. I was trying to keep Mani's walk active...but he finds breaking to the trot easier than a truly forward active walk. And I didn't really make a fuss one way or another...so we trotted...and dropped from first to third. Oops!

So yes, there are, as always. plenty of things to work on, but my goodness I'm pleased with our first time out. It was great since I had no idea what was going on at any point. I am only somewhat joking - yes it was stressful to not know what was going on but it did focus my attention on the tast. All I knew is when my number was called, I had to ride my course. I focused on that and that is all!


Finishing a course and feeling great about it. 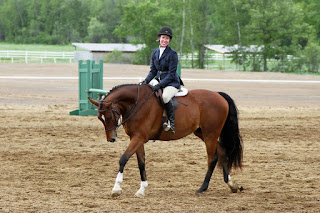 My Beautiful Boy.
(note my 1st hunter braids...would need 2x as many
in the next level of competition!) 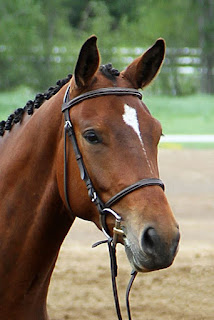 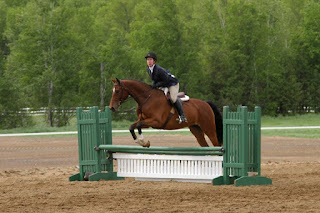 Here's a long spot like I mentioned.
Not quite as nice as ideal but he takes it so easy
that it's still pretty decent green hunter style. 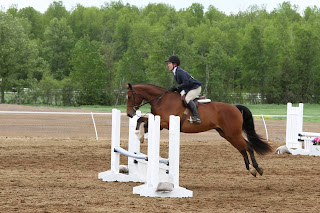 After the jog-out.
I was just so impressed with how he handled everything,
I had to tell him what a good boy he was! 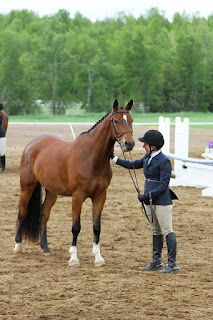 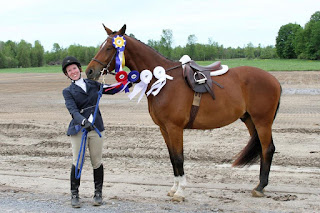 Hastily scribbled by RuckusButt at 12:26 AM

That is soooo awesome!!! You guys look good with all those ribbons. (not that it is about the ribbons...*ahem*)

How did you do with your packing and food prep? Bring a lot of extra stuff?

What, you mean you want to hear about potentially useful information??!? Imagine that! Ok, coming right up.

Congratulations. Those are pretty ribbons!

CONGRATS, how exciting for you!!!!!