Since I have had Armani, I had the same farrier do his trims and basically had the same routine. I would schedule the appointments and show up early and my friend (who works at the barn) and me would work together to bring all the horses in and out for their trims and re-sets. It worked well for both of us, plus this was helpful becauae if I ever couldn’t be there she wouldn’t mind handling Mani for me since I always help her out with client horses (which is part of her job).

That is until she decided to switch farriers before our last trim. She had asked this other guy what she thought of one of her horses’ feet (a TB with stereotypical bad TB feet) and he basically said they needed to fix them right away. I’m not going to get into the details of that decision. For me it came down to logistics – it was easier if we both used the same farrier. This “new” guy was very experienced and did a lot of horses at our barn, so it didn’t seem like a big risk.

Even still, I agonized over the decision. If there was one word I would use to describe how I like all things horse-related it would be consistency. Consistency in training, conditioning, and care. I made the switch anyway.

At first I thought his feet looked great. They looked a lot smaller than before but he still had a wonkin’ big hoof. They also did the nicest bevel on the edges. It looked fancy!  But (and you knew this was coming), for the last 4 weeks, Armani has been ouchy on gravel for the first time since I’ve owned him. So is my friend’s barefoot horse (not the TB) and a number of other horses at the barn. So, it was back to agonizing about what to do.

Granted, I’m sure if I stuck it out I could talk to this guy and get Mani back where he was. At the end of the day, I never had a problem with the work before the switch, so that should tell me what the best thing to do is.

Therein lies the rub. Of course I knew there was a chance he could refuse to take me back as a client but I didn’t really think that would happen since I only had one trim done by someone else, I told him it was only logistics, and he said no hard feelings. Haha, right.

He is, quite understandably, reluctant to take back a client that might just keep switching. He doesn’t know me all that well yet, so he can’t know that I’m not like that unless I had big issues with the work in which case I wouldn’t use that farrier again period. In the end, he agreed to be my farrier again.

This whole situation got me thinking about how funny the horse world is. Imagine if you went to a different grocery store one day and the next time you went to your regular place, they shut the door and said they don’t want your business? Ok, I realize this isn’t the same thing but the principle isn’t that different. What about your hair stylist? Or massage therapist? It just seems odd that someone who relies on clients would deny a client simply because they went somewhere else once.

I could understand if we were bad clients such that anyone would be right to deny their business. In the horse world, it seems the service providers (trainers, farriers, etc) are the ones who call the shots, not the ones who are paying the bills. The idea of customer service is a bit backwards; at least that’s how it seems to me sometimes. A major factor in our economy is competition. I tried out the competition, liked my previous provider better, and went back. Isn’t that a sign of success? In fact, isn’t that better than if I just ignorantly chose one person and stuck with it only because I didn’t know any better?

Interesting questions, to me anyway. Have you had experience with this kind of thing (horse-world or otherwise)?

Looking forward to having my rock-cruncher back. 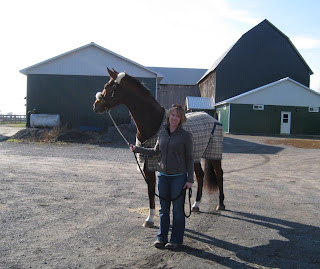 Feelings do tend to get hurt VERY easily in the horse world! That being said Jason and I have learned to be super picky about who we will accept as clients. The truth is that we horse people can be as difficult as clients as vets, farriers, trainers, barn owners, etc. can be as service providers. I always thought of myself as an easy and low maintenance boarder in the horse world. Then I found myself on the other side of the coin and I cringe at some of the things I did or requests I made - and they were nothing compared to most of the other boarders!

Over time as your farrier gets to know you better he will realize that was a HUGE decision for you and that you agonized over it. Right now he is just trying to puzzle out if you are one of the nutters or one of the stable ones. :)

Very good points. It must be interesting (and useful) to have both perspectives.

Fortunately my farrier was out this week so I had the chance to talk to him face-to-face, which always helps. He took me through what he saw in Armani's hooves since the other guy did him and discussed how we will move forward. I think it helped that I made sure to be very understanding about his position. I think we'll be fine going forward.

Melissa's not kidding about the nutters ! They're out there, they're very, very real and they will ruin your business and your life if you let them.

An American in Tokyo said...

I am very good friends with my hair stylist and asked him at one point if he could tell that a customer went to someplace else and then came back to him. He said that he can definitely tell but he acts like nothing happened. He said he is glad that they came back, after all. I think that is an example of good customer service!