Gettin' to be that time of year.


This picture is actually from last year
but Hazel looks so pathetic I had to share. 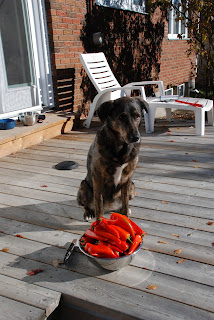 We make lots of salsa and sauces and pepperonata. We STILL end up with a massive quantity of peppers, even though we eat a bunch on salads pretty much daily. First world problem, to be sure. When I have that kind of "problem" there is only one thing to do.

This is also an old pic (lazy blogging!) but I don't think I've ever posted it.
I have a much nicer grill now ;-) 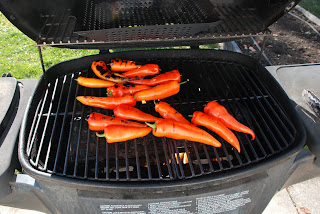 I roast them until they have a good well rounded char on them. Pro tip: when making roasted peppers, it is much easier to peel them after they cool, better still if they have been cooled and refridgerated for awhile. Skin comes away much easier.


Remove the skin. The back of a knife can help. 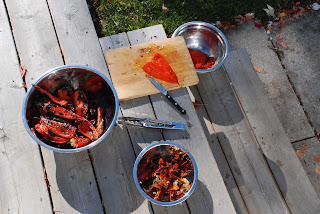 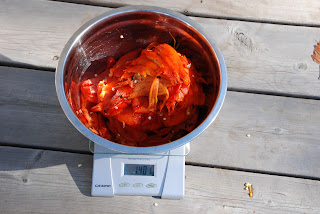 What is it all for, you might ask? I vacuum seal pouches of these roasted peppers and freeze for use throughout the year (that's kale in behind). 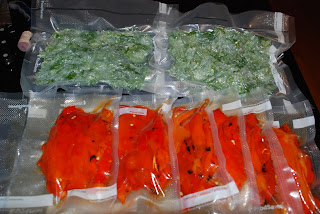 The peppers are a medium hot variety (Crimson Red) and work well in so many dishes. I will use them in pasta sauce (tomato or alfredo), chili, dishes featuring the peppers as centre stage, pasta salad, pizza...the sky is the limit. A great way to add the taste of summer to the February blahs.
Hastily scribbled by RuckusButt at 10:58 PM

Sure, I'd love to come over for pepper pasta one night. xo :)
Jess

Are you SURE you don't want to come work for free and be our chef?

Haha, that's what I had tonight. But I can do you better than that, I'm sure!

Melissa, you almost had me looking up flights...until I got to the "free" part. Hm, can Armani come and board for free?