Not sure what to say, really.

Since that crazy clinic crash, we have been fine. A little stiff, to be sure, but really and truly fine. My main concern has been a bit of mud fever, not the aftermath of the accident.

Armani and I have had 2 more successful shows. That seems like a lot in just the four weeks since but he gave me no reason not to enter and the next one was on the same grounds so I thought it would be good for both of us psychologically. I only did the green hunter division in the first show after, which at this point is only a hair more than a typical lesson - he's well fit for it. 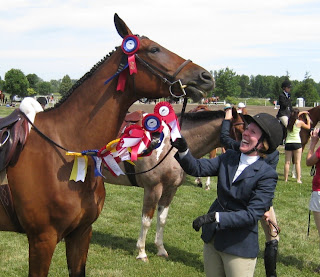 I have to say I've been very proud of myself for perservering despite what happened. That sounds like I'm over-stating things but I know many of you guys know what it's like. I just refuse to let the fear take hold but make no mistake I recognize it hovering at the edges.

Work has also kept me extremely busy, every day has been full-tilt with a high amount of workload and most of it highly cognitively taxing. Not to mention that I am helping out with night chores at the barn more than normal. I usually only do Friday nights but it's been hard to find people and there are other changes happening so I've been stepping in to help. It's too much, though. I'm sure there aren't many people who have the kind of career I do who also work part-time at night, lol. It's not a hard job and doesn't take that long but it gets me home way too late, especially since I live 30 minutes from the barn. Fingers crossed we find someone soon.

I'm still cooking some good food! I even take pictures of it with the intention of blogging... 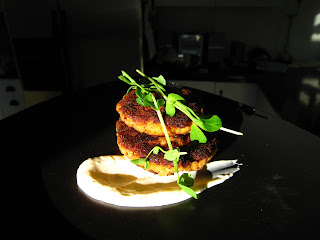 Then a bunch of time goes by and I look at the photo and think "that looks good, too bad I don't remember exactly what it was!"  I think these were fish cakes. Or lentil patties. Pretty sure that's a lime-garlic aoli with a drizzle of basil dressing. Positive those are pea shoots on top. Recipe blogging fail, yes?

Hopefully I can get back into the rhythm of it soon. (How many times have I said that now?)

Hastily scribbled by RuckusButt at 10:11 PM

I think it is great that you have carried on after the accident. Even though you and Armani were find there are still mental scars that have to be dealt with. Congrats on your very successful shows in the last month!

Thanks, it hasn't been easy and I think it will still take some work at this point.