Tonka lost...or out for a stretch? 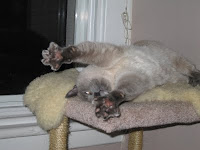 I have wanted to do a blog about my cat for a long time. He has an interesting story and is an interesting breed. I regret that I am doing it now because I need to do something related to him because he is missing.

Tonka is a 13 year old, neutered male, Tonkinese cat. I know, original name! He also sounds like a Tonka truck when he runs around the house. It suits him. 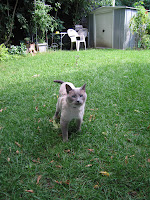 I took today, Friday, off to receive an appliance delivery (that never came!) and figured I would use the extra time to get the house settled more. As a result, I was up later than normal on Thursday. I took Hazel on her night walk around 11:30 pm. When we got home, I opened the door and Tonka was out like a shot before I could even register it. I am always careful because he likes to do this but he has been out in the back a lot lately so maybe I wasn't on guard enough. Usually, he goes to the nearest bush and eats grass. As long as I don't rush at him, I can usually just calmly pet him a bit and eventually bring him in. But this is a new house and neighbourhood.

I quickly put Hazel in the house and followed Tonka into the backyard across the street where I saw him go. I haven't met these neighbours yet and I was worried about entering their backyard at midnight! In I went. I saw Tonka once but he disappeared into a thick tomato garden and wouldn't come. I ran home for his food, came back and started to gently shake it to make that clincking sound. After a few tries, I heard a rustling in the tomato bushes in front of me. I thought it was my cat but out popped a skunk, not a meter away!

Thankfully, the skunk retreated and I was able to get out of there. I then proceeded to trespass into the next neighbour's yard. Based on the fencing, I am pretty sure that is the way he would have traveled. No luck.

I spent today putting up posters, in both my new and old neighbourhoods, walking the neighbourhood several times, talking to anyone I saw, and visiting the humane society to look at the cats and follow up with the report I filed in the morning. It was a very busy and emotionally exhausting day.

Truthfully, I am sick with worry. I've been told that, because Tonka is "pretty", someone might nab him for keeps. What's funny is that Tonka first came to us a "stray" 12 years ago. My sister found him, he was skinny and dirty - his owner had left him outside while on vacation. It was clearly a long vacation as you don't get that thin in a week or two. Oh, and he was declawed when we found him! We decided that anyone who would leave a declawed cat like that did not deserve to have him back. I don't regret this decision one bit.

Tonka likes to blend in. 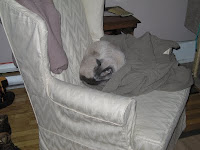 And, sometimes, stand out!
This is my first attempt to photoshop
anything, many years ago. 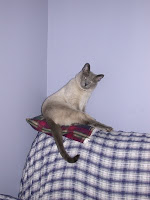 what else could I do?


I admit I am not really a cat person. I remember the day I fell in love with him. He was still technically my sister's cat. At the time, he was mostly kept in a large finished basement as I had a miniature poodle who chased him, so he needed a safe place. My sister was still sleeping, so I went down to clean litter, feed and play with him. We bonded that morning. Tonka showed me how much personality he had. I named him that morning during our play session.

Tonka is a smart and surprisingly compassionate cat. He used to bug my last dog Tia - ambush her when she walked by, pestered her - all in play.
They were pretty close in size! 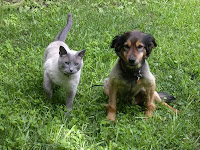 When my last dog was dying, at the age of 18, he helped me recognize and accept that I needed to help her pass. He never lay next to her, until that night. 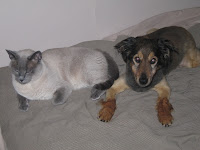 Tonka lying with Tia. This was Tia's last night with us. It is perhaps morbid that I took a picture, knowing what was about to happen, but it was such a moment of animals understanding life in a way that us humans tend to over-think and fail to appreciate. I treasure it as a reminder of the strength of friendship and love, no matter the differences. They don't over-think, they just appreciate the moment. I sure miss my Tia girl, she was a hell of a dog.

And my Tonka cat is a hell of a cat. He needs to come home. I just hope he knows where that is.
Hastily scribbled by RuckusButt at 11:48 PM

Oh, this brings tears to my eyes, RuckusButt.
I cross my fingers and toes and hope that you find him SOON.
The waiting must be awful.

I grew up with dogs during my childhood and youth. When I moved away from home starting my studies, I tried to bring my dog with me. Unfortunately she had problems to settle in an appartment, so she stayed with my parents instead.
I missed animal company very much.
That was how my first cat entered my life, Bagheera.
I brought him with me everywhere.
He was a replacement cat, so he was never very cuddly, but always wanting to be close. When I was sitting at my kitchentable studying on late nights, he loved to walk around on top of my books finally laying down on one...

He became a good friend with my parent's dogs, he could also tease the dogs and they played together, just like Tonka and Tia.
We even took them all out on walks when I was home visiting. Once out walking, my cat in a playing mood rushed out from the small walkway and out on the road straight in front of a car. It was awful.
It was in an outskirt of a villa area, so luckily the car had almost no speed.
Bagheera had no external wounds, but he could not use his back legs. They people in the car drove me home, and we drove off to the closest veterinary hospital which was an hour's drive off.
After an x-ray they stated that the pelvis was broken, but there was nothing for them to do - it would heal of itself.
So we brought him home again, arranging a toilet straight beside his bed. After a few days he was up and balancing against the walls! Cats are amazing. But it was a bit problematic when he was about to turn...
This cat followed me everywhere, even into the bank and the shop, so I had to sneak out if he was outside when I was to go shopping, lol!

Your cat is beautiful.
Cats have a very good sense of orientation, but they are also independant. I think he is just out for a check out of the new surroundings.
Simba (the grey) is taking walkabouts all the time. I have been really worried about him several times, but he always shows up, miewing reprovingly that he is HUNGRY, and marches to his food bowl. Accepting us stroking his back (if it is not too persistant), and then marches off to get some sleep. Worried? About ME??

Animals have always been important to me. I am quite convinced that they understand A LOT.
So I find your last part of the story very touching.
What kind of breed was Tia?
She was also very beautiful.

HorseOfCourse, you brought tears to MY eyes. I know exactly how you feel about being without animals. That is how Hazel came to be in my life - Tia had passed and Tonka was living with my husband in our home town while I was in graduate school in another city.

I am not exactly sure what you mean by "replacement cat", but Tonka is the same way. He loves to be close and pet, but not held or "cuddled". He will always try to lay down on a book or paper.

I used to walk Tonka and Hazel together sometimes but Tonka was always on a long leash. I knew he would disappear and he was a fighter. Also, there was a fox that lived in the bush behind me so I didn't want him to be dinner.

Friends of mine have a cat named Bagheera. She is not the adventurer your guy was though! I am glad he recovered well.

Thank you for your compliments about my Tonka. He IS beautiful but I am wishing that he was some ugly thing so that people wouldn't want to keep him (I am a bit paranoid about this!). My small comfort is that, even if someone tried to keep him, he will escape soon. I know this cat. So, as long as he knows where to go, he will come home, I am sure. My biggest fear is that he won't be able to figure it out with all the rain we've had etc. Also traffic. Please, don't let him be crossing busy streets (they are a good distance away, so I have hope).

Your words bring me a bit of hope, HorseOfCOurse. So many well-meaning people have been telling me terrible stories. My heart has had as much as it can for now. It's been nice to be reminded of the nature of cats. I truly hope he is just on a walkabout. It's silly but I believe he is close by still.

Thank you for your comments. I really need them right now.

My heart hurts for you so! A year ago this month we lost one of your cats and I still have dreams about her coming home. A few months ago my Halle went "walk about" and didnt come home for 3 days...I was crushed but then she came home! My sister's cat went for two days earlier this year and she was an indoor cat only...but she came home as well. They say that it often takes days for them to come back, to feel the pull of huger. I'll bet he comes home in the middle of the night.