This past weekend I spent a lot of time doing yard work. We had wonderful weather - sunny and clear with a cool breeze. It was perfect. We had a ton of garden soil delivered during the week - 10 cubic yards, to be precise. 10 cu.yrds is A LOT of dirt. My husband did the calculations for how much we would need and somehow he over-estimated...we would have been fine with about 6 or 7! Sasha said that as he watched the dump trunk bed raise and start to empty the dirt he thought, "uh-oh." I can't believe I didn't take a picture.

We (ok, ok, Sasha did that while I was at work) filled the raised beds and I ended up building another one out of some big limestone flag stones that we found under the shed when we moved it. That used a little more than half of the soil. So I decided to level the garden in front...which used maybe one more wheelbarrow full. We had intended, at some point, to level the front yard a little better as we have some large valleys on the lawn. It appeared the time was now, so we filled in the lows, raked some soil over the whole thing, and re-seeded. Whew!

On the weekend, we took the plunge and planted some seed outside! It is still quite early to be planting most things but with the mild spring we've had I couldn't resist taking a chance at some early crops. Oooh, I just got a thrill, thinking about "crops". Tee hee.

We planted red and golden beets, carrots, and multi-coloured swiss chard. The seedlings (tomatoes, peppers, cucumbers and ground cherries) spent some time outside too.

I was compelled to draw up some plans, so I had some fun playing around on the computer. It's not to scale but I had fun "drawing" the veggies. They were all done free form, so don't laugh! 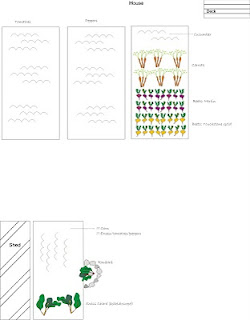 I personally love my little veggie drawings. My husband says he can tell by the carrots that the earth wasn't tilled enough before planting because they grew all wonky. Smart ass!


We actually only planted one row of red and one row of golden beets so that I could stagger the growing. I will be alone for most of the summer, so I don't want everything early or I won't be able to keep up with it all. What can I say, it's an experimental year!

The big decision now is what to do with the rest of the bed next to the shed. I had originally planned to plant corn there but I have too many tomato and pepper plants, so I'm undecided.
Hastily scribbled by RuckusButt at 10:13 PM

OOOOh so jealous. I want a garden so badly. Since I am moving to Canada in July to a farm house I am hoping to start one (landlord permitting) I will have to pick your brain about it when the time comes. :)

Sorry Golden! I know how you feel, this is the first year in a long, long time I've been able to have a real garden. I am beyond excited about it. You are welcome to pick my brain any time!