I am feeling somewhat frustrated today and can’t keep my mind on work. Probably not the best time to write a blog post, but what the heck.
I’ve been dwelling on the difficulty I have explaining riding issues on my blog. I think I get the general ideas out well enough, but it’s the details that I’m often a little quick to either throw in or omit, without much regard. And riding is all about the details. For example, in my last post I mentioned how I was trying different things to encourage Brumby not to curl behind the vertical. I re-read part of the post last night and got hung up where I said something about “driving” him forward for those first few strides. Did I really mean “driving”? To what extent? Will readers think I’m pumping like crazy when the poor horse is trying to do what he thinks he’s supposed to do and needs more physical development before he can support himself properly anyway? I wanted to edit it to explain further what I meant…or change it to “actively support” or some such thing (hmm, now that I think about it ‘actively support’ really just means riding, doesn’t it ;) ). I thought about the discrepancy between what I say, the particular words I use to describe an action or thought, and what I’m actually doing or thinking. Word choice can be extremely important since readers know me only through the words I choose to put together. 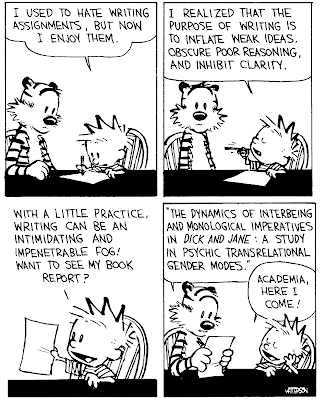 Of course it was late and I was just winding down after being at the barn all night, so I left it as-is in favour of a shower and sleep.
Sometimes I think I should forget about blogging. I figure if I can’t take the time to properly flesh out an issue, or be careful in my words, than what is the point? But I want to keep posting, most of the time. I just wish I had the time or energy to do it better. Almost every time I post about horses or riding I think that anyone who reads it will think I’m an idiot. Is that weird? Does anyone else experience a degree of blogging anxiety? I know, it’s ridiculous.
What’s my point? No point, really. Just spewing some words, thinking “aloud.” And I guess that’s just fine.
Hastily scribbled by RuckusButt at 4:12 PM

RB, I'll catch up with your two posts tomorrow, OK?
I have been out travelling with work again and I forgot to post a comment on your last one. Now time is late and I have to go to bed!

Keep on going - your posts are pretty clear to me, at least, and I enjoy reading them. I also have a lot of trouble getting my posts right - sometimes I think I work too hard on them!

Thanks Maria, that's nice of you. But I don't want you to think my issue is because of lack of comments from you or anyone else. It's just my own feelings of inadequacy, more than anything. And maybe my lack of writing comprehensive posts. But I DO love your comments :)

I'm really glad you've been enjoying them Kate, thanks for the encouragement. I usually wish I had time to work more on mine but if I wait until I have time then I never end up posting that idea. All my best posts are written (in my head) on the drive to work, I think!

It's hard to imagine that you feel it's difficult to get your posts right because I find them well thought out and they really cover all (or close to all) sides of an issue. And HoC, you have a reputation for describing riding -from both horse and rider perspective - with incredible detail and clarity. AND it's fun to read.

I just had a moment of needing to "get things out" honestly and uncensored. I'm being a moody mare.

Riding is such an intricate and intimate sport, no one has enough time to write out the zillion details of what you are meaning to say in a blog post. That said I think your posts are very clear and always get your meaning (I think I do anyway). Most experienced horse people understand what you are saying when you say drive him forward. We know you don't mean spurring him on vigorously, just pushing him into the contact. No further explanation needed IMO!

I just wanted some more time to write a response, because your post coincided with what I have been pondering about myself the last days:
The difference between what we say we do (and sometimes think we do) and what we actually do. (Dressage) riding is so very much about balance and small signals, and you have to think a lot about how you organise your body.
Many of our movements are unconscious, it's like our bodies live a life of their own! That's why I miss mirrors in my daily training.

When that is said, I don't find your comments unclear. There's a lot of mumbo-jumbo in riding, which drives me crazy.
Riding Brumby forward in your transistion from trot to canter is just the right thing to do. "Clear as sausage water" as we say here. (Which isn't clear at all,lol)
So keep up the good work!

I have got a suggestion to you in the downward transitions. I guess you have been collecting the canter before asking for the downwards transistion to trot, right?
When you collect, don't use your seat. Sit up straight but use your legs instead. See if that helps.
If Brumby has a large canter, he might have problems to shorten his steps and still keep the activity, so concentrate on the rhythm. It has to be a clear three beat when you collect!
If you don't have it, ride forward and try again.

If your horse is correct in the collected canter, the trot and the transition will most likely be good too.

I know my horse and where we are at in our riding program good points and bad but it IS hard to convey that in words. People use different words and they interpret what those words mean to them...

And I know there are many kind horse people out there... but I'm always afraid of someone blasting me for being where I'm at with my horse and the things I do wrong. To me, it's all about the journey and I'll never be PERFECT... who is? All I can do is work on being better each time I ride.

So yes, I totally know what you are talking about and I feel your pain!

I think you should be yourself ... don't get too hung up on worrying what others will interpret. Everybody will interpret things differerntly. :)

HoC - really good thoughts, I'll be posting more about this soon. Be prepared for some questions that start with "How do I..." :-D

Thanks Shanster! I am always a little hesitant to read comments after a riding post, in case I finally get the blasting, lol. But so far those who comment have been kind and constructive. I appreciate your vote of confidence!