Oh, for the love of pesticides!

Ok, ok, so I don't use pesticides on my property. Still, this is my new favorite curse. Some of you might recall that when I moved in to my house one year ago (!!) we soon discovered we had a major issue with earwigs. It is actually a rather comical post, if you want some background.

Our main arsenal was to locate the nests around the foundation and pour boiling water on them. That worked well enough that I was no longer finding as many in the house. It rained a LOT last summer and the yard was still quite a jungle, so I really didn't spend much time out back, especially in the evening or at night. That was probably a very good thing for my sanity.

Naturally, earwigs thrive in moist environments. This, I believe, contributed to the abundance of them this year. I've also been out there a lot more, attempting to tend to (read: save) the vegetables, so I see them more. Also, I often don't have time to get back there until late evening, just when they are becoming active. Either way, there are a LOT of earwigs around here.

We did the same boiling water procedure this year, only we had the advantage of doing it in the spring while they were still immature. I really can't imagine what it would be like without doing this because you literally kill hundreds at a time. I do use soap and water which is mostly effective at killing them on direct contact and does little to protect plants directly. So I focus my efforts on areas they collect, such as the corners of my raised beds.

When I built the beds, I didn't worry about them being perfect. This was a mistake! They are good and solid but there are some corners that have small spaces between the boards where they aren't quite square.  I didn't even consider it at the time but these are spaces that the earwigs LOVE. Bah! In my defense, I don't think they could be perfect enough, especially once the boards weather a little.


I have lost all of my Swiss chard, beautiful rainbows of completely eaten leaves, they are. And there is no longer any hope of eating my beet tops. The cucumbers, a small pickle-like variety that are also tasty for eating raw, are the most recent hosts. Some of the leaves curl, especially as they work their way through the chicken wire they were meant to climb. These are earwig hotels. Room service at it's finest. Eat, sleep, and s**! all in one place.


The one other successful method I use, one that my sister discovered, is quite simple.  Fill a container with water, oil and soap. This is certainly a familiar recipe to me but I had tried to use it in little traps with minimal success. My sister told me she had great success with open containers and using more oil than we had in the past. I used ice-cream tubs from a local shop that we had been saving for "something".  A couple inches of water and a few good glugs of any cheap vegetable oil on hand - I really only use olive and grapeseed oil in cooking, but I happened to have some corn oil around, so I used that. Also a touch of dish soap, to break the surface tension. Just don't use anything citrus, like I did last year. Original palmolive seems to work best.

Are you ready for the results??


Oh, for the love of pesticides!
One night! 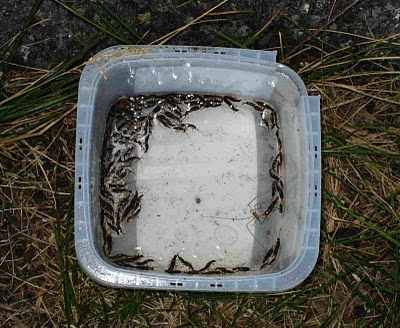 I have a hard time determining numbers from just eyeballing it, so I decided to count them out, roughly.


I'm not sure how well this will show up, but I counted 115! Bottom right corner is where it ends. I suspect this is an under-estimation because some are on top of others. 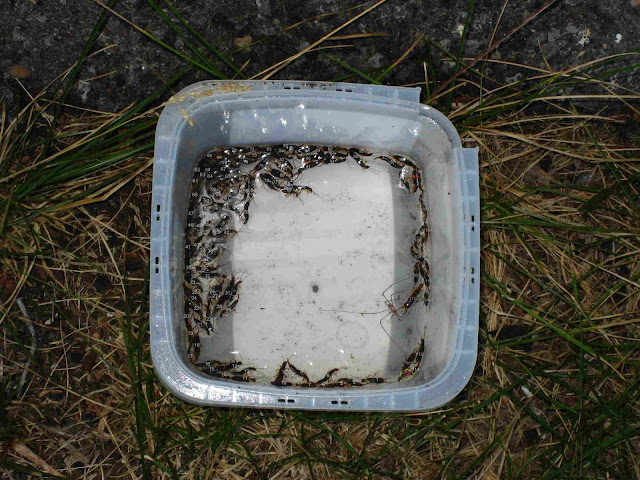 I have to admit, sometimes it's a good thing that you can't buy pesticides in my province any more. Some days, I think I would break down and get some earwig pellets, if I could. I would never use a broad spectrum spray - I've worked hard to keep bees in my garden all season, I'm not about to kill them. But targeted pellets....well, I could make a case for them when I'm most desperate.

Instead, I will keep trying to fight the good fight. But if I occasionally wish for total earwig annihilation, you'll understand, right?
Hastily scribbled by RuckusButt at 10:25 PM

I'm glad you're making a wee dent in your earwig population. Great post !

Thanks, it does seem to help, though the progress is slow.

I did regret the 2 "oops" deaths in the tub I showed - one 'daddy long legs' and some other spider. The population of spiders in my yard is not lacking, so this is tolerable collateral damage to me, especially given the numbers of earwigs caught!

I am totally creeped out and off to bed. Great :-/

Ugh- earwigs are the worst. There was actually one on my desk at work the other day!

Glad the soap/oil trick is working! Too bad they have destroyed your veggies so much. A little collateral damage in the bug world isn't too terrible... (not a spider fan...)

Sleep well ? LOL ! Yes, that was a smart-arse remark.

You might try spraying that concoction directly on your plants too. My only caution would be to do so in the evening to avoid the sun burning the leaves. (And a cupboard full of a little black market Sevin wouldn't hurt either !) :)

...We have a flying beetle down here that is the size of the palm of my hand (ie. HUGE) and that hums at you when you get too close. I can't get the liquid death out fast enough when those things are around! Makes me shudder to think about !

Laura - if I see any at work I think I might lose it!

Lol, Jason. I slept just fine...I go to great lengths to keep earwigs from hitching a ride into the bedroom! I do spray the plants with the soap & water but not including oil. I thought the oil would start to get gummy and gross on the leaves. I spray late evening and get any bugs currently on the plants. It probably helps a little in the longer term but not nearly as long as an actual pesticide would.

Eeek! Sevin is really hard on bees, I wouldn't use it. But the pellets I mentioned are made from the same main ingredient, carbaryl, and mixed with attractants. I do think I would use it if I could because, a)it doesn't go on your plants, and b)is placed under rocks etc so few other things would get to it, just creepy crawlies.

Wow Thank you for sharing. A method that actually works!

As you know, fortunately I don't have a problem with earwigs, but if I ever should I would def. employ this method.

PS shame about the other casualties, but these things happen in the garden. Imagine those beasties you step on without knowing :(