Well, I had a little delay in posting about the fun show. It was back to reality with respect to work this week, so I was busy trying to get back into the routine. It was the longest week EVER which really sucked because I am extremely busy - despite making faster progress on a project than I thought I would, I'm still crazy behind in the grand scheme of things.

We did horribly and it was still fun :)  In the morning, I had a deecnt warm-up and then rode in 3 flat classes. We were awesome in warm-up, he felt really great right away and didn't even seem to mind the (relative) chaos in the arena. That lastesd until after I did some canter warm-up. The canter warm-up itself was fine, Brumby was soft and uphill; though more tense than I would have liked, he was still with me.

That was the end of the good stuff for awhile. We broke gait in all 3 flat classes during parts where we were supposed to trot and Brumby broke into canter. He was ignoring my seat and ducking behind the bit, so brakes just weren't there. This is, in my opinion, the essence of all our problems and will get it's own post soon. I was really trying to look at the whole day as a learning experience for him (and me!), so I tried to keep a good attitude about it all, even though he was really being somewhat insane.

Turns out his owner hadn't been riding much at all in the previous number of weeks. That could help explain it, as could the huge quantities of grain he's getting (also another post of it's own!!). Whatever the cause, Brumby was barely obedient to my aids throughout and just wanted to run, run, RUN. You can't hide a break to canter in an indoor arena, no matter how brief, the judge can hear it. And we had two sets of eyes, the judge and my coach who organized it. And apparently there are no points awarded for bucking :-D

After that, we had about an hour and a half break before our dressage test. Brumby was still pretty fresh for that test, since the morning classes were pretty light for him. Still, he was more attentive without the other horses in the ring. We managed a decent test, but I knew it wasn't anywhere close to our best. I was shocked when it turned out that we placed second! It was a large group of fairly advanced riders (mostly hunters) with well-trained and reasonably calm horses. I attribute most of it to the horse's naturally nice movement compared to some of the others. My coach assures me it was a nice test and we hit the exact marks, even though it's training level and therefore have some "space" in which to make the transition happen. Our comments included a head toss (negative), a dramatic transition (negative, though I joked later it could be positive ;) ), and a nice finish, very straight down centre line.

So we had a small redemption before the afternoon.


At least I'm smiling!
I'm pretty sure Brumby is
thinking about chewing on the
fake flowers in front of him! 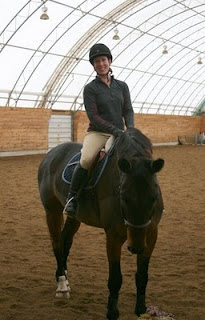 This is the only decent photo I have. Sasha had to stay home with a sick foster puppy.

The afternoon I was supposed to ride in the 2'3"-2'6" hunter class. Given our morning, my coach and I decided I should take him in the poles class and make him trot it, mwhahaha! Of course, I wasn't super happy about it since it is WAY harder to trot through a course but I knew it would be good for the horse.

So we did that, which was fun (eek!), and then the 2' cross rails. All in all, a good learning day for myself and the horse. I wish I wasn't having so many issues with his owner right now, then I'd feel like it was all worth it. But when you consistently disagree on horse care issues...well, it starts to get pretty frustrating. I might be nearing the end (but again, that's a post of it's own!).

Ok, so fun shows are fun, as long as you take along a sense of humour and don't mind eating a bit of humble pie.
Hastily scribbled by RuckusButt at 9:53 PM

I always joke that any show where I don't have an unplanned dismount is a good show! Sounds like you had a good time over all and 2nd place in a class of good riders and horses is something to be proud of!

Sounds good fun, although you know where the issues seem to be - hope you can get the owner stuff sorted.

I understand that there are some issues to be sorted out. It is not always easy to share a horse.

Still, even if your horse is exercised every day and feeded accordingly, they can behave like giraffes, or scared antelopes.
Just ask mine ;-)

Thanks all. Yes, no unplanned dismounts = success.

Horse of Course, you are right, of course! I agree I think he was tense/scared anyway and displayed his inner antelope. Still the other factors don't help :)

I'm very glad you had fun and enjoyed yourself. Sounds like Brumby had a little fun too, even though he wasn't supposed to have his own agenda for fun. But I'm glad you feel good about the show and that it was a valuable learning experience.

Sounds like you had a good day - and 2nd place in dressage is pretty darn cool! Hope you can get the owner stuff sorted out - although owners can be tricky to deal with. You hinted to me over the summer that you were having issues then as well. What a pain!

Are they going to do another show over the winter? It would be nice to have something else to do until the weather warms up!