Like many people, I really don't like February.  By about this time of year I seem to have zero energy for pretty much anything. It sounds overly dramatic, I know, but that doesn't make it any less true. I don't even see it coming, usually. Add to the February "blahs" the fact that we are up several times a night with a puppy and my husband just submitting 3 papers for journal publication and you have a very tired house.

I woke up this morning, fully intending to go to work. The puppy (Logan) and I had our bathroom breaks - fortunately getting it right in terms of who goes inside and who goes outside. Logan, at almost 8 weeks, knows what to do when he is outside and even sometimes asks to go out when he needs to, but occasionally thinks perhaps he should try inside, just in case. I, on the other hand, am trained pretty well to only go inside with a few exceptions.

Anyway, we do our thing, I toss a handful of kibbles his way and look in a mirror. Ugh. At that moment I am awake enough to realize that I look exactly as awful and tired as I feel and the inklings of a cold I felt yesterday were indeed getting worse. So I called work and went to bed for another 4 hours solid. I woke up feeling like hell but thankful the puppy slept just as long (I was smart and let him sleep next to me). About an hour later I felt better than I have in weeks.

We did manage one task on the weekend that helps fight February. 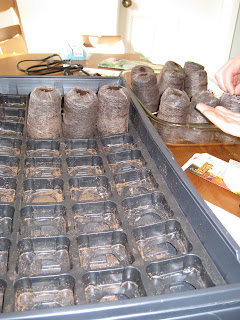 We started seeds for several varieties of peppers, all hot [Monet (jalepeno), big bomb (cherry bomb), explosive ember (serano)] or medium hot (crimson red). We wanted to start some plum type tomatoes but ran out of large size jiffy pucks (seen in photo above, re-hydrated) and couldn't find them in store either. I also get other peppers and tomatoes as transplants in the spring but some varieties I can only grow if I start from seed. I will also start cucumbers, ground cherries, and maybe a few other things in the next few weeks.


What? Doesn't everyone have a
mini-greenhouse in their dining room? 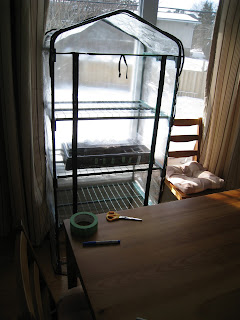 Hang in there everyone, the end is in sight!!
Hastily scribbled by RuckusButt at 7:55 PM

Not weird at all ! I remember...vividly actually....the first day each March or April when the snow melted and the frost came out and I could smell the soil for the first time in months !

Sometimes a few extra hours sleep is enough to put things back in balance - glad to hear you are feeling better again.

I love your mini-greenhouse! I know what you mean about smelling soil, but I'm not a keen enough gardener to get into the seed starting business. I'll just live vicariously through you... I actually had a small seed starting tray from Lee Valley a few years ago and my cat knocked it off the table, so I sort of gave up after that.

I can almost conjure the scent from you description, Jason. Unfortunately in the city, the first smells of spring is often dog poo :-/

Thanks Laura! Funny enough, that's one reason we have the greenhouse - it keeps the cat out of the plants. So far, anyway. Last year he taste-tested a few seedlings for us which I was not too impressed with!

February is the worst...the longest month in reality.

You are good to have at least started your seeds. I can't do that. I can't get inspired to clean or start gardening.

I drive 3 miles to the barn and see the horse faces and only then can I do anything. For some reason, they get me to move. I ride, groom, pick up manure, clean Foggy's stall. Then I drive home and don't move again.

February is the worst. I can't wait until March 1!