I almost don’t even know where to begin. The last few weeks have been pretty crazy with discussing Brumby’s behaviour with his owner and trying to arrange something for myself. At one point I actually had the thought that I should just give up riding for a bit. I could remove myself from all the drama and save money! But then I’d lose my sanity…
Overall, Brumby’s owner was very understanding so I had no problem on that account. But then the lying and misdirected blame started. The blame wasn’t directed at me but I’ve heard my share of lies in the last two weeks! Why is it so hard for people to be honest? In this case, I think the owner believes her own lies…her reality seems to be radically different from everyone else’s. Even other people's version of what Brumby did while she was riding. Or she's just a liar. Or both delusional and a liar!
I don’t want to dwell on all that though. My next task was finding another horse. I knew I could lease the other bay gelding I’ve mentioned before but I wanted to at least see what else was out there.  I spent some time looking at local ads and there was very little in the way of what I was looking for within reasonable driving distance. I also really, really love the barn where I am and I know that is a rare thing indeed!
So I’m trying out the little guy. I call him little but the owner and I sticked him on Friday and he’s a little over 16.1hh, so without shoes he’s a solid 16.1 and a pinch. He seems so little compared to Brumby, who I figure is 16.3 but is built bigger all around. Or maybe his personality isn't so big and imposing. I was given free rein to ride him whenever I want for the rest of the month while we work out money and conditions.


Looking cute in the new halter I bought him. 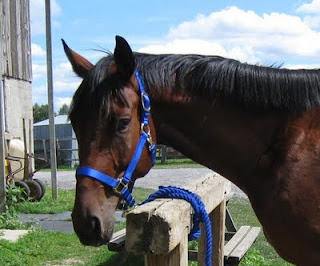 He’s had his teeth done (finally!) so I’m very happy about that and he clearly is too. I’ve been riding in a bitless bridle so as to not make him uncomfortable. I do like the bitless but find it hard to soften effectively with that particular one (which I borrowed).  Since this guy has a very soft mouth, I’d prefer to have something with better feel.
We are currently negotiating who is going to do his farrier work because I am not happy with the state his feet are in right now. He is under-run, especially in the front, with no heel and long toes, flares etc. I know horses don’t always have hooves that are the same shape and even size, but his are so different I just can’t imagine that’s how they should be. I’m not an expert by any means, yet I can tell these are not happy hooves. On top of that, the cork holes don’t work – it seems like they’re too big, you can’t catch the thread even with the tap. And that’s with apparently new shoes.  It’s not just aesthetics though, he also trips a lot.
We’ll see where this goes but the good thing is that his owners seem to be willing to address these issues and agree with me on the hoof issues.
Hastily scribbled by RuckusButt at 11:08 PM

Good for you, I hope you have fun with him! And if you really don't have fun don't be scared to say "next."

I'm sorry there was difficulty with Brumby and his owner.

Your new prospect is very handsome. What a sweet face and beautiful coloring. I hope he is a good fit.