The Light at the End (and other calamities).

At the beginning of the summer, shortly after Alex left, I was working on a post titled "The last seven days."  Several rather exasperating things had happened, as they always do when he's out of town. I thought I'd do one of these posts a week to give me a chance to vent and, more importantly, laugh off the ridiculous things that happen. Of course, I was too busy dealing with the things to write about them.

The rest of the summer has continued on the same path! In the last 2 weeks alone, I've had to deal with many things. One morning, I was positive I smelled gas at the front door. I was tempted to ignore it since I had so much work to accomplish before a big meeting last week. Fortunately I recognized how silly that was. The gas company was great and came about 40 minutes later. Sure enough, there was a small leak in the meter out front.

Then, last Tuesday, I had the crazy long meeting. We have these every month but this one was especially challenging for me because 2 of the main items on the agenda were my projects. I was basically "on" all day. Later that night, I was on the phone with my mom. I was telling her how I was extremely exhausted but had an awesome day - I rocked the meeting, made a great dinner, cleaned the kitchen spotless, and did some gardening. Just as I was finishing up describing how on the ball I was, I heard Hazel start to bark.

Now, Hazel rarely barks. When she does, it's typically a couple low "woofs" in warning. Very rarely, she does her hound bark. This bark barely sounds like a bark. It's more like a torturous-sounding combination of a yelp, howl, and bark. The first time I heard it, I thought something horrible was happening to her. Turns out it was the neighbour's cat who had once attacked Hazel for no reason (I swear, I have video proof somewhere).

So as soon as I heard that particular bark, I said "Oh, this isn't going to be good." Sure enough, it was a skunk. I spent until 3am washing her, walking her, etc. I was dead on my feet. Eventually I just didn't care anymore and the dog and I collapsed into our respective beds. The next day, I did a few more treatments, missed work, and tried to catch up on sleep.

Suggestion: don't scream in a panic for your dog to come when it's
confronting a skunk that hasn't sprayed yet.Try to instruct the dog forcefully
but with something less than a crazed level of volume :-/ It might help avoid the spray. 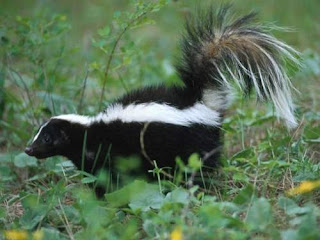 Naturally, in the midst of bathing Hazel, I got a call from Alex. To say that I was not in the best mood would be the understatement of the year. On top of that, our connection was bad. I was so tired, I don't even know what I said. I do recall commenting how this is yet another freakin' thing I have to deal with on my own. Of course, I expect this just makes him feel wonderful. We had several more days of miscommunication, so that sucked.  Although I knew everything would work out fine, misunderstandings happen sometimes after being apart for so long and only having brief conversations, but my world is never right when there is tension between us. Finally on Saturday we had the time to hash it out. All was well.

In between all this, I had taken some time for myself on Friday (I had previously schduled the day off, for relaxation and pampering the dogs, since I was dog-sittung). With all the skunk stuff, I needed some horse time. I got to the barn and started grooming my boy but it didn't take long to realize his stifle, now the opposite one, was locking. No riding for me. Vet is scheduled, I'll keep you posted.

Back to talking to Alex on Saturday. About a minute after I hung up, as I was preparing to take the dogs out (I was dog-sitting for my mom), I heard the carbon monoxide alarm going off in the furnace room. I went down and pressed the button that shows what the highest reading was. It said 32ppm, which is within the accepted range but still odd. Now here is the lesson that you should know your devices. I thought if I pressed the "test" button, it would give me a new reading. When I did that, it showed 224ppm and did the emergency warning beep pattern. While this isn't a death-is-imminent level, it is med-high and will make you sick. Since I had the a/c on, that meant I had a pretty closed system. So I shut down the a/c, opened all the windows and took the dogs for a long walk. The monitor says to call 911 if you get the emergency beep sequence, but I wasn't convinced. I figured I could do that if the problem remained.


Once back from the walk, I went back to the basement and re-tested (or so I thought). Again, I got a reading around 224. So I took the monitor and brought it upstairs. I tested each room, getting readings between 224 and 230. At this point I was suspicious. Why would it still be so high after the windows upstairs had been open for over 30 minutes? So I looked up the manual online and discovered two things: 1) they are not made to take the instant readings I thought I was taking, they monitor constantly and display the value and sound alarm at various intervals. The time between readings/alarms depend on the concentration of CO found, 2) The unit, for some unfathomable reason, is programmed to display a value "around 200" whenever you press the test button, and then it does the emergency beep sequence and returns to monitoring. So I was FINE but had an hour where I thought my night was going to really suck. Read your manuals, folks!


It seems simple, but a small misunderstanding
in the way things operate can cause lots of headache. 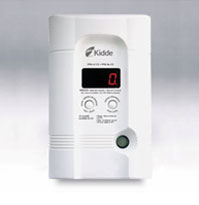 The next day, I found out that one of the students my husband is co-supervising for her thesis was one of only three survivors in a plane crash that killed 12 people in Resolute Bay, Nunavut. He was pretty shaken, I think, as this time he had a face to the tragedy. While I am relieved she is going to be fine and am incredibly sorry for those that weren't so lucky, I don't think I need to tell you how it made me feel.
So to say I am glad that I will, universe willing, have him safe at home in a week is another understatement. Although we've been doing this for years, it's much different to have your right-hand man away when you own a home and work full time, as opposed to being a student. I have to say I coped much better this year compared to last, since I socialized more, had more fun, and was more used to running the house on my own. But there were also more stressful events. His career choice has given me a few extra grey hairs this summer, that's for sure. Honest, I saw them this morning!
It's the light at the end of a very long tunnel, for me. I hope for a safe return. As much as I understand his passion for what he does, I'm finding it increasingly difficult not want to beg for more reasonable field seasons. But he's at the top of his game and there is no way I am going to clip those wings. If I'm honest, though, I wish he would trim them himself, just a little. On the other hand, I want him to fly as high as he can, I really do. I am so proud of him. Oh, love. It's never simple. And yet so simple.
Hastily scribbled by RuckusButt at 11:09 PM

Sounds like quite a week. We have lots and lots of them like that around here, believe it or not.

Thanks to various calamities it's been over a year since Melissa and I have had an entire day off at the same time. As much as I love what we do that is WAY too long to go and I am SO looking forward to being able to schedule some time together.

I agree, that IS way too long! I think sometimes it's easy to neglect taking the time when you have such a good relationship and love what you do. Still, it's important to make the time. If you guys burn out, the farm will be far worse off than if you sneak away for awhile.

Alex will be taking quite a bit of time off for the next few weeks and we have a week scheduled together mid-September. I would have liked to take time off earlier but can't thanks to my work committments.