The saddle I’ve been using for most of my time with Willy doesn’t fit. I’ve known from the start that it wasn’t great. In the beginning what I knew is that it sits too low in front but there was decent wither clearance and the sweat marks were even under it. Knowing at least a bit about saddle fit, I could tell it wasn’t 100% correct, so I put it on him without any pads etc. It actually seemed pretty level to me.  I then looked at the panels and they seemed to make good contact their entire length.  I was satisfied that although it wasn’t the best fit, this saddle was pretty decent on Will.

Here I will add that I am using one of the owner’s saddles that was not specifically for this horse. It’s a Bates Caprilli and a nice enough saddle…if it fits your horse.

For the first few months I rode in that saddle without any discernable problem. We weren’t really schooling anyway, so perhaps that helped hide the problems somewhat. On one outing to Mecca (aka Apple Saddlery), I saw a nice sheepskin half pad for a good price. The half pad I’ve been using (again, the owner’s) is not real sheepskin and is quite thick and not very conforming. I did like the wither “keyhole” it had but that’s about it. So I bought the sheepskin (and a lovely new bit, also on sale!).

I instantly liked the position I was in much better. I was straighter and not nearly so forward-tilting.  However, on our third ride with that pad, as I was tacking up, Willy looked unhappy when I started saddling. Normally it doesn’t bother him a bit. I noted the behaviour but honestly thought it was more of a reaction to the 3 horses in the barn who were getting chiropractic work at the time.

We rode inside and did some actual schooling. Although things started out well enough it ended up being a frustrating ride. He just wasn’t himself and I couldn’t figure out if he was just being a baby and was objecting to being inside and being asked to focus or something else. I thought I was asking for small amounts of focus at a time, nothing that should have been a big deal. It’s not like he’s completely green and I do ask things from him every ride, even if we are out and about.

At the end of the ride I dismounted and took his saddle off to cool him out. The second it was off his back my heart sank.  I could clearly see that the saddle was bridging across his back. There were sweat marks by the withers and the back of the saddle but nothing in between.  I honestly wanted to cry.

I guess the good thing is the new half pad let me see the problem clear as day. I figure the better breathability of the sheepskin meant he didn’t sweat where there was no contact unless the exercise was intense, which it wasn’t that day. The previous rides were both warmer days and longer, more intense rides, so the whole length of his back had some sweat.

After that I tried another saddle – a beautiful Schlesse all-purpose that was really much more like a typical dressage saddle. It fit Willie nicely but they are made wide and it killed my inner thighs. I didn’t realize how sore I was until the next day when I sat in it again. Oye!  It made me brace and ride weird (or weird-er!).  Oh well, it wasn’t going to be a good long-term solution anyway.

There was nothing for it but to look into getting my own saddle.  I struggled with the decision a bit – buying a saddle for a horse I’m only leasing seemed a little hard to justify.  But I had to do something and it is an investment that wouldn’t necessarily only be good for this horse, if things don’t work out with him long term.
I am fortunate in that our area has a very, very good saddle fitter. He has trained with master saddlers all over the world, is the saddler for the RCMP musical ride, etc etc. He has also designed and now manufactures his own line of saddles, based on the Tolga tree (he studied with Tolga Aksoyek).  I like that they are made in Canada (though they do use imported French leather).  I knew we would be in good hands.

I went to his shop and sat in a ton of saddles. I told Alex he had to come with me to keep me from getting something really high-end. His response was to ask when I’ve ever known him to disagree with purchasing quality sports equipment for the sake of saving a couple bucks in the short-term and that you always spend more long-term with that approach. Oh, how I love my husband!

Tolgas, Pessoas, you name it, I sat in it. I liked that the saddler was by no means trying to up-sell me.  I said from the start that this was for a horse I’m only leasing and that I’d like something reasonably priced but that I also believed in buying quality once rather than throwing money away on something I would want to replace sooner rather than later. By far my favourite was one of his own Vision Saddlery saddles. But there was also a Pessoa I wouldn’t have complained about owning and a couple others that would work well.

One saddle was awesome, reasonably inexpensive, and in excellent shape (it was gently used) and just felt great. The problem? Colour. It was a pale blonde-ish colour. Probably would have been trendy if it was a western saddle (if that’s still a trend in whatever discipline it was trendy in!). He said I could darken it some with oiling but it didn’t seem worth it to me. After all, how would I match a bridle?? ;-)

The saddler came out two days later to assess Will. He showed me all the things to look for and how to assess the saddles. He took the time to look at the Bates I had been using, “just in case” and discussed all the ways it was wrong  :-/

I learned a lot of the finer details to looks for, beyond what I had read about saddle fit. I really think I had to see different examples on a horse in real life to make all the theory I’ve read truly useful. It was also useful in that I could be 100% confident in the reasons behind what the saddler recommended –this way I could see what he was talking about for myself.  I was pretty happy that the best match for Willy was my favourite saddle of the bunch, especially since I thought it was ruled out as suitable for him. Turns out I was confused by a similar-looking saddle.

It is similar to this one only without the external calf block.
Mine does have one under the flap, which is plenty for me. 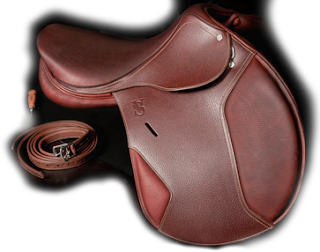 I will get pictures as soon as I get the matching bridle (!!) sorted out, oiled, etc. I was delayed with these things this week because I blew a tire on my car...of course Alex was out of town so it was a little trickier to get it replaced timing-wise (I took the backroads to the barn for 2 days, lol). I should get everything put together this week though.

A potrait from today. 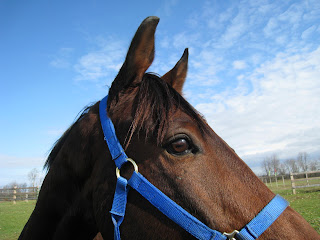 Hastily scribbled by RuckusButt at 9:19 PM

Saddle shopping is ten times more painful than horse shopping (or leasing). Glad you found one you BOTH like!

Great story - Glad that you were able to find something of good quality that works for both of you!

Looking forward to seeing some pics.

I guess I got lucky because I found it pretty fun! I was worried about making the wrong choice but the saddler kinda made that a non-issue.

Thanks Laura. Probably a liitle longer story than it needed to be but that's what happens when I do them in bits and pieces over a week! I'll get pics one of these days...it's dark so early now it will have to wait for the weekend. Maybe when I gallop Dolly ;)

Oh - so you are actually willing to try galloping her on the track? :-) In a western saddle? lol

Ummm, more to hang on to? I am stupid enough to be willing...but in reality probably shouldn't on a horse I've never ridden...in the spooky, spooky fall. Maybe July/Aug next year?? hee hee