All I wanted was to walk outside

I had the day off work and, although overcast, it was a beautiful day. After the bitter cold last weekend, it felt so warm at -3C(26F). I was determined to ride outside. Yes, I knew I might have a fight on my hands...but we've hacked out alone before without a problem. Of course, we've also hacked out and had TONS of problems. I figured if I just stayed calm and patient, surely Brumby would see how much fun we could have.

We got along just fine at the start. I mounted and he was very forward as we walked away from the barn. Not TOO forward but he was striding out nicely. Of course, we were also walking toward his turnout at that point :)

There is a galloping track on the property with turnouts in the centre and along two sides. My intention was to start there and then head into the fields. I had checked the footing when I first got there and it was fantastic. As I got to the track and turned Brumby down the track, away from his turnout, he was still walking with calm confidence. That is, until we approached boogey man #1.

There are two places along the track that have known boogey men who most certainly exist for the sole purpose of eating him and only him. If I can get past these, chances are I`ll have a good ride. 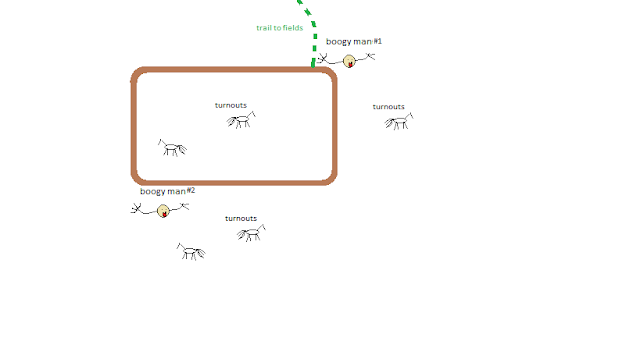 If I can't, well, I guess I get what I got today. The return of the balking, rearing, bucking monster. I got after him pretty hard initially. Not right away, mind you, I gave him enough of a chance to be good, and offered that he could simply stand still as long as it was in the direction I wanted. But when he reared, I was not very nice about it. I got him pointed back in the direction I wanted and offered to let him just stand still, which he did for about a  nano-second. The second time he went up (or maybe it was third or so...there were a couple little hops in there too) I brought my crop down on the side of his neck, a couple inches behind the ears. This surprised him! He stood stock still and was fortunately still in the direction I wanted. Once again, I sat extra still, breathed deeply, and made sure I was relaxed.

Throughout this, I was actually very relaxed. I don`t think punishment is very effective on a good day and I don't think it`s ever a good idea to punish if you are angry, frustrated, or upset. At the same time, I had to let him know that this was BAD. Keep in mind, we've been hacking around the property a hundred times, he wasn`t spooking at anything, he just didn`t want to go that way.

I was glad that he was happy enough at that point to just stand (he is usually terrible at this, even in the arena, and I've been trying to work on it but he has zero patience). It gave me time to think about how to proceed. I did not want to get in a fight and push him too far but I also think it's ridiculous that I can't walk the horse around an area he is extremely familiar with. I did not think it would be a good idea to "give up" though it was rather tempting to just go to the arena.

After standing for awhile, I turned him around and headed in the other direction. He was happy! And even passed by his gate without a sign of hesitation. Then we hit the edge of the reach of boogey man #2 and I got to enjoy more fireworks. Once again, I insisted on standing quietly for a bit and then I turned and went the other way.

On the other side, we actually got further than we had before and I was quite pleased. Still, the brakes went on and I got an extra special rear-buck combo - Brumby's specialty in situations like this. Ok, I got several. I was only asking that he face that direction, I was not pushing him forward at that point. As soon as he did, I would relax with a light contact and my seat and legs relaxed but there. Not pressing but not absent.

We would stand quietly for a time, and I rubbed his neck and softly told him he was a good boy. Then, I would gently apply some leg and he would either spin, rear, or buck, or some combination of those. So, I would get him (often with a fair bit of "discussion") facing the direction I wanted and stand still again. After doing this twice, he started to show interest in a path just ahead that leads off the track into the fields where I had hoped we would ride today. I decided he could have the choice - the track or the path.

After a few moments, he moved forward toward the path. He went a few steps down it and then hopped a bit and spun around. Sigh. Yet again, I got him facing the right direction and let him stand still. He looked around. Breathed deep and chewed. Hmm. Once again, he volunteered to head down the side path and once again put on the brakes after a few strides.

At this point, I could feel I was losing patience and really wanted to wail on him. So I decided that once I had him standing calmly for a few moments again, I would call it quits. As long as I was the one to ask him to turn away. It had been about 30 minutes at this point.

I know there are probably lots of things I did wrong, and many other ways I could have handled it. I did the best I could in the moment and now I just have to try to learn from it.

Some of my (early) thoughts:
- I wish I could dismount and lead him through the tricky spots. If I were to do that, there would be no hope of getting back on from the ground. Perhaps next time I can pre-place a mounting block of some kind but I'm not sure anything would be available.
- I considered riding back and forth along the stretch he will travel both to drain energy and to see if he would go a little further each time. In this way, I could keep the pressure off as soon as I felt him resist, but would continue to make him move. On the other hand, I thought this would just be letting him get away with the behaviour.
- I guess I have to give up on the idea of hacking out alone. I realize many horses have issues with this...but I wonder if I should be leasing a horse like this since I value being able to hack - alone or in groups.
- I am glad that I at no point felt like I was in any danger of coming off. Without this, I wouldn't have been able to be as calm as I was through it all.
- I am also glad that I know for sure my contact did not make the rearing worse by taking a strong hold on his face. I was able to maintain some contact but not get strong or tense with his shenanigans. Yes, I'm sure. I think the regular jumping helps with this!
- I've been toying with the idea of terminating this lease for some time, for a variety of reasons. Today was one more reason to pursue another option. Maybe.

Ok, I'm done for now. I need to digest the day a little more. Feel free to share your thoughts. I don't mind criticism but please keep it respectful, I'm doing the best I can and am always trying to learn.
Hastily scribbled by RuckusButt at 8:54 PM

I have no idea whether or not you did right or wrong by your horse, but I have to say your diagram of grazing horses and boogeymen made my day ! I'm half tempted to print it off and hang it up by my desk !

I don't think you did anything wrong - you kept riding and got some stuff done. Sounds like he was trying to offer a few steps in the right direction at the end. The balking/rearing combo is one of the hardest to deal with - what happens if you immediately start calming turning him in a small circle if he balks or even hesitates - I'll bet there's some hesitation in there before the balk and rear happens? Most horses prefer to go in a straight line, and you'd also be giving him something else to think about, and that sometimes helps.

Jason - thanks, it made me feel better making it :) Feel free to print it as you wish!

Kate - I did do some circling (I( don`t have your gift for describing details) but you are absolutely right, I could have made him work harder just within his comfort zone. My circles were more geared to getting him facing the way I wanted. I like it, thanks.

Excellent diagram...I think I have actually spotted boogeyman #1 before on my rides.

I'm sorry to hear about the rearing especially - that makes me super nervous. I think you handled him very well - I would have either come off or chickened out and jumped off - I don't have the seat or the confidence to deal with that stuff. A bit of bucking/crow-hopping or something is one thing, but when you combine everything, it must get frustrating and a bit scary.

You would think that most horses should be able to hack out alone... Although, Rusty can give me a bit of a hassle some days. His tactics are much more tame though. He will stop, do two 90 degree turns on the haunches and stop again. A tap with the crop and a kick is usually enough to move him on.

All that being said - I know you have mentioned problems with the lease situation before. Are there other options at that barn? If you wanted, you could come out and ride Rusty (for free!) to do some hacking. He is just an old guy, but fun to hack most of the time. I even have a (wintec only, but functional) English saddle that I could dig out of storage for you!

oops - just realized I was signed in my other account...

Actually I think you handled it quite well. The rear/balk is a tough reaction to work through. The only thing you could have done is maybe, as you already mentioned, make him work harder in his comfort zone.

I am not nice to rearing horses ever, be it on the ground or in the saddle. IMO rearing is one of the most dangerous behaviors a horse can offer and it isn't the time to look for a positive, ignore a negative or play nice. You did the right thing (again IMO) by punishing him while staying calm yourself. It is one of the few times where I go straight to punishment instead of looking for a way to reward or just ignoring the negative.


And I also have to chime in and say I loved the diagram!

Look at the long arms on those boogey men...just ready to reach out and grab an unsuspecting horse. I'm sorry Brumby was behaving so badly. He was very naughty, but I think you handled it well and kept your cool.